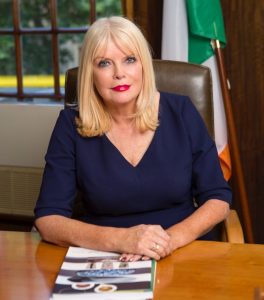 The Minister for Jobs, Enterprise and Innovation, Mary Mitchell-O’Connor T.D., announced today that €500,000 is being made available by her Department to the IDA to support the Agency’s global communications in the wake of the British EU referendum result. The Minister indicated that the resources will be used to help the IDA communicate effectively in key target markets about the continued benefits of investing in Ireland.

Speaking about the post British EU-referendum challenges for Ireland, the Minister said: “We are all aware that the result of the British referendum on the UK’s membership of the EU poses a range of challenges for the Government. Addressing those challenges – particularly those that may affect our economy – will be a key priority of mine in the time ahead. We should be equally determined, however, that we do not overlook whatever opportunities may emerge for Ireland on account of the referendum result. Securing new foreign direct investment (FDI) for the country is one such possibility and IDA Ireland is already working hard with goal in mind.”

The Minister continued: “It is critical that the IDA has the resources it needs to compete effectively for FDI in the wake of the referendum result. Strengthening its communications capacity – all across the globe – will be especially important if the Agency is to convince potential investors as to why Ireland will remain a highly attractive destination for FDI, whether in the short, medium or long-term. We cannot forget either that the global FDI market is increasingly competitive and that the IDA has to fight hard to win new investments for Ireland.”

Commenting on the allocation of the additional resources, the Minister said:
“I am pleased that my Department was able to identify savings that could be allocated to the IDA for its communications overseas. This support will assist the Agency in implementing its important post referendum communications plan. I am confident as well that the sum involves represents real value for money and that the Agency’s work abroad will help lead to future investments that will create more jobs and opportunities for the people of this country.”