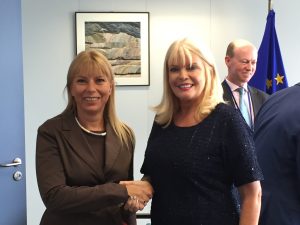 Minister Mitchell O’Connor will discuss important trade and single market issues, including progress on the EU-US trade negotiations (TTIP), the EU-Canada trade agreement (CETA), and the Commission’s initiatives to achieve progress on strengthening Europe’s Single Market. The Minister will be underlining Irish support for the EU’s trade agenda in order to ensure that Irish exporters gain greater market share in existing markets and improved terms of entry to new markets, and urging progress on the EU’s trade negotiations which have yet to be implemented (Canada) or completed (Japan and USA).

The Minister will also set out the significance of the impact on Ireland of the UK’s referendum decision, and to convey the unique nature of Ireland’s position as the Member State most directly affected by the UK’s exit. The Minister stressed that “it is crucial that the EU institutions at the highest levels fully appreciate the potential impacts for Ireland at the earliest stage, before any detailed negotiation process, that will prepare the terms for the UK’s departure and its future relationship with the Union.”

Minister Mitchell O’Connor said she will “emphasise the importance of the Brexit negotiations taking full account of the impact on Ireland in relation to the economic and employment context, our desire to avoid the introduction of customs or trade barriers, the competitiveness challenge, and our ability to sustain engagement in research cooperation, including under EU funding programmes.”